Acquired and infectious disease is a major health issue and can effect any member of the community regardless of the race , colour or sexual habits. However some groups are more at risk than others. Each year in the United States, as many as 50,000 people become infected with HIV, and nearly 13,000 people with AIDS die annually. In 2018, an estimated 50,300 new HCV (Hepatitis C Viral) infections occurred in the United States. Between 2010 and 2018, the reported number of acute HCV infections quadrupled. High rates of new infections were predominantly among young adults aged 20-29 years and aged 30-39 years.

HCV infection is common among people with HIV who also inject drugs. Nearly 75% of people living with HIV who report a history of injection drug use are co-infected with HCV. All people who are diagnosed with HIV are recommended to be tested for HCV at least once. People living with HIV are at greater risk for complications and death from HCV infection. Fortunately, direct acting antivirals that are used to treat HCV work equally well in people with and without HIV infection.

HIV testing has never been quicker or easier than it is today, and more people have been tested than ever before. But fear and misperceptions can still keep people from finding out their HIV status:

Today, more than half of American adults have not yet been tested.

Percentage of people who have ever been tested, overall and by population, since 2010

Many people with HIV do not receive ongoing treatment

Ensuring that people living with HIV receive ongoing care and treatment is one of the most effective ways to protect their health and prevent the further spread of HIV. Treating people with HIV lowers the amount of virus in their body and can dramatically reduce their risk of transmitting HIV to others. Of those living with HIV, just 40 percent receive regular medical care, and only 30 percent are successfully keeping their virus under control through treatment.

Prevention programs must serve a diverse population that includes gay and bisexual men of all races and ethnicities – particularly those who are young, transgender women, and African Americans and Latinos – and help provide those populations with equal access to accurate prevention information and effective prevention tools. With more people than ever before living with HIV, it has also become increasingly important for prevention programs to address the needs of HIV-infected people and their partners.

Disparities in HIV rates are fueled by social & economic inequities

A wide range of complex social and economic factors drive the HIV epidemic and place African Americans and Latinos at greater risk for this disease. Many of the contextual factors that increase risk for other diseases (such as heart disease and diabetes) also fuel the spread of HIV within these communities:

High community rates of HIV: Because the burden of HIV is greater in some communities, African Americans and Latinos are at increased risk of being exposed to HIV infection with each sexual encounter. Therefore, even with similar levels of individual risk behaviors, African Americans and Latinos are at higher risk of infection than other races and ethnicities.

Low socioeconomic status: CDC research shows that those who cannot afford the basics in life may end up in circumstances that increase their HIV risk. Census data indicate that in the United States poverty is not evenly distributed – nearly a quarter of African American and Latino families live in poverty (compared to 10 percent of white families).

Today, the need to do more with existing resources is greater than ever. To achieve a higher level of impact with every federal prevention dollar, CDC is pursuing a High-Impact Prevention approach that works to match cost-effective, scalable interventions to heavily affected populations and geographic settings to maximize reductions in HIV incidence.

Many americans have become complacent about HIV

Too many Americans no longer view HIV as a serious concern. A recent survey by the Kaiser Family Foundation found that the percentage of Americans who rank HIV as a major health problem is substantially lower than it was a decade ago. Even more troubling are studies showing that among some of the populations with the highest rates of infection (including gay and bisexual men and African Americans), many people do not recognize their risk, or they believe HIV is no longer a serious health threat.

Each new generation needs to be reminded of the still-serious nature of HIV and the importance of prevention. More than three decades after CDC reported the first cases of AIDS, the sense of national crisis may have waned – but our resolve cannot. 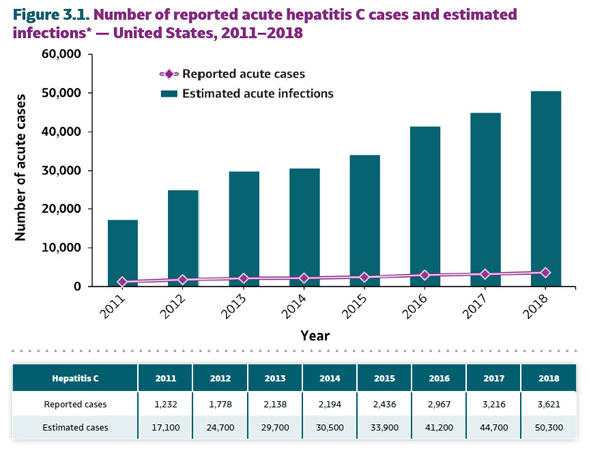 Source: CDC, National Notifiable Diseases Surveillance System.
* The number of estimated viral hepatitis infections was determined by multiplying the number of reported cases by a factor that adjusted for under-ascertainment and under-reporting(7). The 95% bootstrap confidence intervals for the estimated number of infections are shown in the Appendix.

Large section of the population is a risk from Hepatitis C